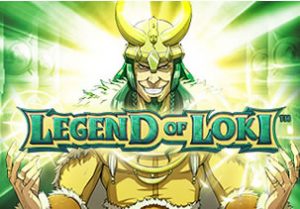 There’s a suitably epic feel to the design of this Scandinavian saga - the reels include Norse style A to 10 letters and numbers as well as a quartet of higher paying gods. The best of these is the grinning figure of Loki who offers awards of up to 25 times your stake per payline. They’re joined by the hammer which is the wild.

The other symbol is the scatter which offers payouts of 3, 5 or 10 times your total stake if you land 3, 4 or 5 anywhere on the same spin - more importantly, it also triggers the game’s Free Spins feature. Here you can look forward to 10 free spins. Before these begin, 1 symbol (anything apart from the wild) is chosen at random. Whenever this symbol hits during the free spins, it stays locked in position for the rest of the round.

Legend of Loki also comes with a trio of base game modifiers that can liven up the base game:

There’s plenty of action on offer in Legend of Loki. It’s pretty volatile too, with the variance sitting in the medium to high range. You can win 2,083 times your total stake on every spin/free spin too! The cartoon-style design works well and there’s good selection of extras. The best winning opportunities arise during the Free Spins feature if you manage to land a high value symbol as a sticky.

iSoftBet has made a pretty good stab of its first Norse-themed game. If you enjoy epic sagas, then Legend of Loki is worth a spin. I would also try Thunderstruck II from Microgaming and Viking Gods: Thor & Loki from Playson.