Recommended casinos to Play Pixies Of The Forest II 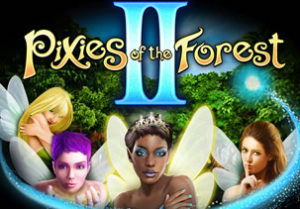 The design in Pixies of the Forest II is very similar to the original. Joining the A to J symbols are a trio of higher paying fairies. The best of these is the Halle Berry lookalike. Land 3, 4 or 5 of her in combination and you’ll win a payout of up to 15.15 times your stake. The top paying standard symbol is the logo which offers awards of up to 30.30 times your stake per payline. There’s also a wild that can appear on the middle 3 reels in the base game and reels 1, 2, 3 and 4 in the bonus game.

After a winning combination is landed, the successful symbols are removed and new ones drop in and replace them – this is known as the Tumbling Reels feature. Each successive symbol drop win increases the Spirit Meter by 1, up to a maximum of 5.

Once the Spirit Meter reaches 3, you’ll trigger the Features Wilds feature - here you’ll receive some wild extras. They include a stacked wild on any of the middle 3 reels, a random selection of wilds appearing across reels 2, 3 and 4 or countdown wilds that lock in place for a specified number of spins.

Land 3 Bonus symbols on the same spin to trigger the Pixie Queen’s Free Spin Bonus feature - pick from 1 of the Bonus symbols to determine how many free spins you’ll receive. The tumbling reels and feature wilds are in play during the free spins too. Look out too for the pixie symbols which appear on reel 1 as these come with a 2x multiplier attached – this is called the Pixie Queen’s Multiplier feature.

The Pixie Queen can also bestow even more goodies including boosting the Spirit Meter, removing a symbol from play or adding more free spins to your total via the Pixie Queen’s Gifts feature. In total, there’s up to 180 free spins to be played with.

Pixies of the Forest also offers a chance to land a Jackpot prize via the Pixie Progressive Picker feature. This round is triggered by landing 3 Jackpot symbols on the same spin. Pick from the fairies until you land 4 that match. That’s the prize that you’ll win.

The second outing for the Pixies is an enjoyable one. The design is decent enough but it’s the range of extras on offer that make it worth a look. The tumbling reels keep things moving along quickly enough and the wild extras and multipliers give the free spin rounds potential.

The fairy theme isn’t one of our favourites but the gameplay options make Pixies of the Forest II a slot game worth considering as you can win 2,000 times your stake on each free spin. As well as the original, Pixies of the Forest, I recommend you try Pixie Wings from Pragmatic Play which is excellent.