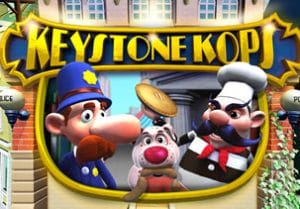 The cartoon imagery here harks back to the early part of the 20th century and is very nicely done. Set against an American street scene, you’ll see whistles, truncheons, handcuffs, telephones and 4 different policemen spinning around the reels. There’s also a wild and a range of police badges which trigger features. We’ll come to them shortly. There are 5 base game extras to consider first though:

There are 3 main bonus features on offer in Keystone Kops - they’re triggered by landing 3 bonus symbols. Which round you get is determined by the scatter on reel 4 – here are the details.

As far as volatility goes, Keystone Kops sits somewhere in the middle. This is a medium variance game offering a balanced range of hit frequency and payouts. IGT combined 3 live casino games to create Keystone Kops. Overall, it works well enough. The design is pretty good for an IGT game and there’s plenty of variety on offer from the features.

The slapstick theme won’t be for everyone but if you want a game that offers loads of extras and a none too serious theme then Keystone Kops is worth investigating. I also suggest you try The Heat Is On by Microgaming which also has a police theme.