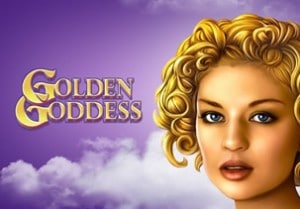 The reels feature symbols of the Golden Goddess and her handsome other half as well as a horse, a white dove and playing cards from ace down to 10. The Golden Goddess logo is the wild and substitutes for every other symbol apart from the bonus. Find 5 in a payline and you'll win a 1,000 coin jackpot. They're cartoon style and stand out nicely against the backdrop.

The only symbol that cannot hit on all 5 reels is the rose which only appears on reels 2, 3 and 4. It's also the key to triggering the other main feature, the Free Spins feature. Find the 9 stacked rose symbols on reels 2, 3 and 4 and you'll be awarded 7 free spins.

The variance in Golden Goddess is on the low side of medium so you should get plenty of play for your bankroll.  The visuals are simple yet effective with the on-screen action played out to a relaxed harp heavy backing track. The game is all about the Super Stacks though.

I’ve barely won more than 40 to 50 times my stake which doesn’t make it a slot game I play regularly unfortunately. Golden Goddess is very popular in land-based casinos but I prefer a little more volatility personally – for this reason, I will stick to other IGT classics like Pharaoh’s Fortune or Cleopatra II.