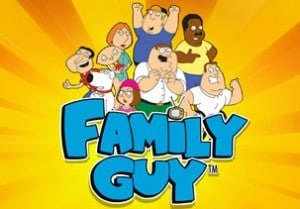 As you'd hope from a slot based on a hugely popular animated TV series, IGT hasn't skimped on the visuals which are excellent. Look out for all your favourite characters from the show including Meg, Chris, Stewie, Brian the dog, Lois and of course Peter.

Instead of standard playing card filler, Family Guy uses ray guns, teddy bears, TVs and bottles as its lower value symbols. They're all drawn HD style and appear just like they do on the show. A big thumbs up for the visuals then. How about the features?

Find 3 or more World Bonus symbols anywhere on the reels and you'll trigger the Family Guy World Bonus feature - spin the globe to reveal which bonus you've been awarded.

First up is the Drunken Clam Bonus feature which is set in the show's pub - here you get to choose a character to reveal a multiplier which increases as unselected characters collapse. There are also beer taps to choose which offer payouts of between 5 and 750 coins - find the win all tap and you'll do just that. The round ends when your chosen character collapses or he's the last character standing. Payouts of between 25x and 1,000x your total bet are on offer in this round.

Next is the Chicken Fight! Bonus feature which pits Peter in a scrap against a giant chicken - you'll be awarded between 1 and 7 prize sacks each containing a cash prize of between 5x and 1,000x. Choose who you think will win the three-round contest. Increasing multiplier prizes of up to 5x are on offer if your pick wins a round.

Finally, there's Lois' Hot Free Spins Bonus feature which will award you an initial 10 free games. Keep an eye out for the Giggity Retriggity symbol which only lands on reel 3 but awards 5 extra spins when it does. When the wild heart symbol lands on reel 5, it will fill a meter at the bottom of the screen. When all 3 hearts are filled the 4 different coloured Lois symbols will turn wild and remain that way for the remainder of the feature.

There are also 4 randomly triggered bonus features that can hit on any spin that doesn't include a bonus symbol:

Peter's feature will award a random cash prize of anywhere between 200 and 500 times your line bet.

Stewie's feature will turn up to 3 symbols wild with a second payout made after the new wilds have worked their magic.

Extra pays are awarded for 1 to 3 characters in Lois' feature - the precise amounts vary depending on the character. Peter is the one to hope for though as he'll be boosted from 100x to 1,000x.

Finally, Brian's feature will allow you to trigger the World Bonus round with just 1 or 2 Bonus symbols rather than the usual three.

As you can see, there's plenty in Family Guy to keep action junkies occupied. The overall variance is in the medium range though so expect a balanced range of payouts which should keep both casual fans and hardened jackpot hunters happy.

Family Guy should appeal to a far wider audience than just hard core fans of the show thanks to its impressive imagery and huge range of features. The bonus rounds are top notch, covering all the main feature bases.

To be honest we've always preferred The Simpsons to Family Guy but this slot is certainly good enough to make us give the Griffin family and the denizens of Quahog a much closer look. If you like slots based on TV shows, you have South Park from Net Entertainment which is also highly amusing.