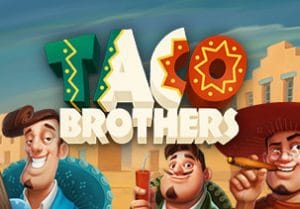 The development team at ELK Studios have created a cracking looking slot game - the setting is Mexico, 1881. Set against a dusty, townscape backdrop, the reels include a lamp, bottle of Tequila, cactus and classical guitar, all of which award payouts of 20, 50 or 80 coins if you land 3, 4 or 5 in combination.

They're joined by the Taco Brothers themselves - the dynamite-wielding Pico pays up to 100 coins, the guitar-playing Pepe awards up to 300 with cigar chomping Paco the top payer, offering up to 400 coins.

There's also a standard wild which doesn't offer any specific payouts but does replace all other symbols apart from the bonus and re-spin symbols. The re-spin symbol is the Taco Brother logo which only appears on reels 2 and 4. When that happens, you'll be awarded a second spin, giving you another chance to land the trio of safe symbols which activate the Wild Escape feature.

The Wild Escape feature is played on a new set of reels - your free spins here will be boosted by the addition of running wilds and a multiplier which can boost your winning by up to 3x. The Taco Brothers drop onto reel 5 one at a time during the feature - the big extra is that they also act as wilds.

They then move across the reels, 1 position to the left with every spin. The action is spiced up thanks to the addition of a pair of extra characters. The one you'll be hoping to avoid is Captain Diaz - when he appears, he'll lock up a brother and prevent him from moving. The lovely Senorita does just the opposite, unlocking and releasing any of the Brothers who have been locked up by el Capitano. She can also award extra free spins. The feature continues until all 3 brothers have escaped from the jail or are safely tucked up behind bars.

Featuring excellent design and a superbly catchy soundtrack (especially during the feature) and a decent bonus offering, there's much to like about Taco Brothers. There are decent wins on offer during the feature thanks to the walking wilds. It scores highly on the entertainment stakes though thanks to the impressive back story and quality design and is a Mexican adventure that even Donald Trump might enjoy. I also recommend you play Poltava Flames of War from ELK Studios which is superb – if you like the Mexican flavour, Net Entertainment’s Spiñata Grande is highly recommended.