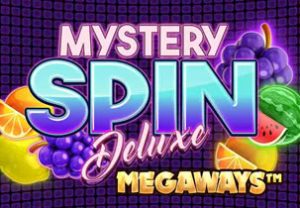 Mystery Spin Deluxe MegaWays looks like a glossy, modern fruit machine. On the black reels you’ll see brightly coloured A to 10 royals as well as a collection of classic fruity symbols. In order of value are the cherries, lemon, grapes, orange and melon. The best paying symbol is the lucky red 7. Land 3, 4, 5 or 6 of these on adjacent reels on the same spin and you’ll receive a payout of 1, 1.5, 2.5 or 10 times your stake. There’s also a wild that substitutes for everything.

In Sync feature - on each spin, you’ll see a purple glow appear behind a random selection of adjoining reels. These reels will then sync and display the same symbols on each of them. You’ll usually see 2 synced reels but it’s possible all 6 can morph and display matching symbols.

Mystery Spin Deluxe MegaWays is a pretty straightforward for a MegaWays slot game, especially one from Blueprint Gaming who are renowned for their feature heavy games. In this case, the rather simple and repetitive gameplay works well. The synced reels keep the pace moving along nicely and the Mystery Spins can deliver some top action – up to 10,000 times your stake on every spin.

If you’re after Blueprint Gaming’s usual range of modifiers and bonus features, then you’ll be better looking elsewhere in the catalogue. Mystery Spin Deluxe MegaWays takes the classic fruity and freshens it up with the MegaWays game engine. I would also suggest you try Medusa MegaWays which is from NextGen Gaming and sees a real favourite get the MegaWays treatment.