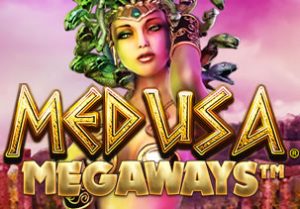 Set against an ominous looking purple sky and ruined marble columns, the reels are made up of A to 10 royal values as well as objects relating to the ancient theme. The best of these is the winged horse Pegasus which pays 30 times your stake if you land 6 on adjacent reels. Medusa naturally is the wild.

The number of symbols on each reel changes with each spin. The number of potential ways to win alters too. This can be anything from between 324 right up to 117,649. As well as the MegaWays game engine, there are plenty of extras on offer here.

After a winning combination hits, the Reaction feature takes place. The winning symbols are removed and new ones drop in and replace them. The ‘reactions’ keep on coming as long as a new winner hits.

Medusa’s Gaze feature - this is triggered if the Medusa wild appears on 1 of the 4 window positions above reels 2, 3, 4 or 5 (known as the Extra Reel). The reel directly below turns totally wild and a new ‘reaction’ takes place.

Free Games feature - land 3 scatters on the same spin and you’ll receive 10 free spins. A further 5 free spins are added for each extra scatter on that triggering spin. The free spins come with an expanding multiplier which starts at 2x. Each ‘reaction’ win increases the multiplier by 1x – this is called the Unlimited Win Multiplier feature.

After the free spins is over, you’ll be offered a choice with the Temptation feature - if you wish you can gamble your winnings. If successful, you’ll replay the feature. If you lose, you’ll forfeit your winnings. If you don’t want to wait to trigger the Free Games feature, you’ll also have the opportunity to buy it via the Buy Pass feature. Just click on the Buy Pass icon to the left of the reels. This will set you back 100 times your stake.

There’s plenty going on in Medusa MegaWays. The design is pretty good and the stirring soundtrack fits the theme pretty well. The Free Games feature offers some pretty good potential thanks to the expanding multiplier and the stacked wilds that can hit courtesy of the snake-bitten soldier. We found the action here to be pretty volatile with top wins of 50,000 times your stake on each free spin!

This ancient adventure is a likeable one. This is one of the better MegaWays slot games we’ve played. Well designed and offering plenty of extras, Medusa MegaWays offers plenty of appeal. I would also urge you to try the other Medusa slot games from NextGen Gaming which have earned cult status – the first Medusa title was the best in my opinion (until Medusa MegaWays came along).