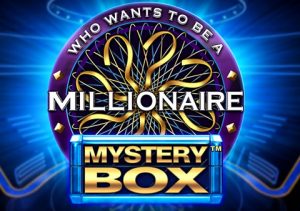 Who Wants to a be a Millionaire studio 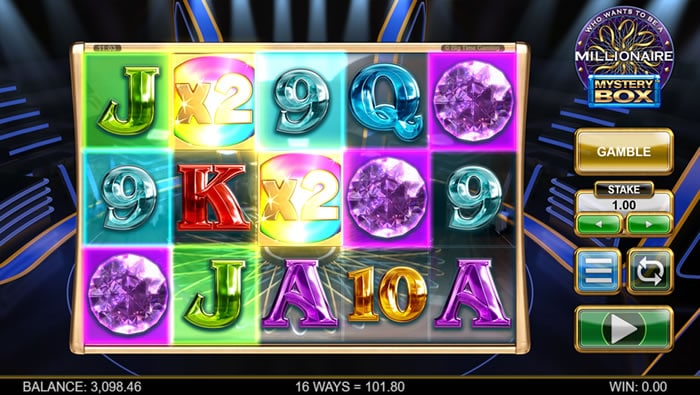 Anyone who has seen the TV show will find plenty that’s familiar in Millionaire Mystery Box. The famous studio forms the backdrop to the action. On the reels are A to 9 royals and higher value jewel symbols. We expected Big Time Gaming to have gone for their MegaWays game engine here but they’ve instead opted for a more straightforward 5 reel, 243 ways to win machine.

Joining the standard symbols is a 2x multiplier wild. Land 1 of these in a winning combination and the payout is doubled. See more than 1 in a winner the multipliers are combined. These wilds can appear on reels 2, 3 and 4 only. 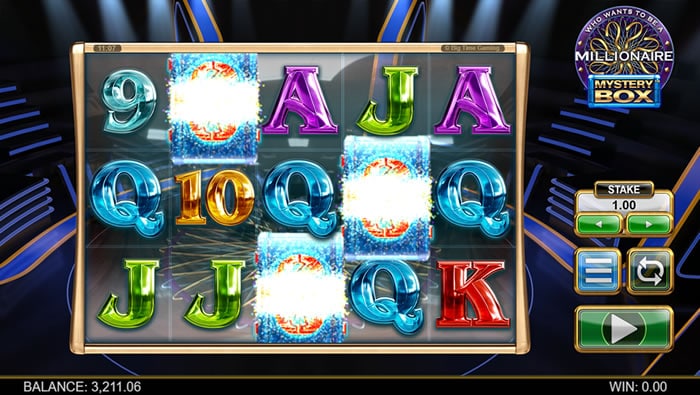 On any spin you could see special Mystery Box symbols appear. All example of these that hit on the same spin morph into the same matching symbol. Unusually, that includes both wilds and scatters as well as standard symbols. A payout calculation takes place with the matching symbols in place. This is called the Mystery Box Reveal feature.

If you like a gamble, you’ll be offered the chance to do so following every winning spin in the Gamble feature. If you’re successful, you’ll double up. Pick incorrectly and you’ll lose the lot.

Free spins with multipliers up to 50x 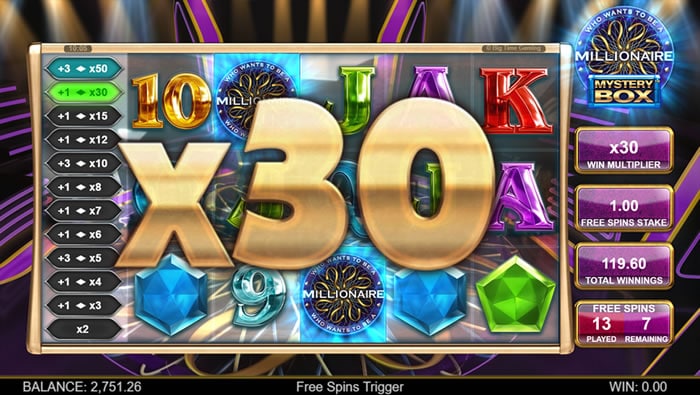 The best opportunities to land a big win come via the Free Spins feature. To activate it, you’ll need to land 3 or more of the Millionaire logo scatter anywhere on the reels on the same spin. You’ll start with 7 free spins at 1x. Landing scatters during the feature round adds to your free spins total as well as increasing a multiplier. The more scatters, the bigger both get. If you manage to collect the full 11 scatters, you can look forward to 24 free spins with multipliers of 50x!

It’s not the most volatile slot game you’ll play but the medium variance can still pack a decent payout punch. The top award here is 12,000 times your stake per free spin which is still decent. The original Who Wants to be a Millionaire slot game (by Big Time Gaming) has become a fan favourite.

There’s plenty to like about the sequel too. There’s nothing flashy about the design but the features can deliver plenty of action, especially the Free Spins feature. If you enjoyed the original, expect more excitement from Millionaire Mystery Box.