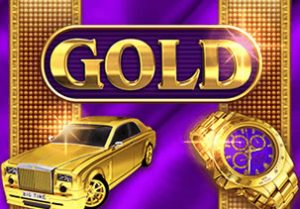 There’s a flashy, luxurious feel to the design in Gold. In fact, there’s so much gold on view even King Midas might find it a bit OTT. The reels include A to 9 royal values alongside rings, credit cards and watches. The best paying standard symbols are the gold car and the stack of gold bars. Land 5 of these on 1 of the 20 paylines and you’ll pocket an award of 37.5 times your stake.

The gold briefcase is the game’s wild. It replaces all other symbols apart from the scatter. Land 5 wilds and you’ll win a bumper payout of 500 times your stake. Whenever a wild forms part of a winning combination with a standard symbol, the payout gets a 2x multiplier boost and is doubled.

Gold comes with a single feature round – the Free Spins feature. It’s triggered by landing 3 or more of the gold disc scatter on the same spin. After a payout of 5, 10 or 100 times your total stake, you’ll then go on to play 15 free spins. The action then moves to a gold-filled bank vault.

Any winning combinations that hit during the free spins benefit from a 3x multiplier with all payouts trebled. Landing 3 or more or more scatters on the same free spin results in a re-trigger and another round of 15 free spins – there’s up to 180 free spins to be won in total.

As you’d expect from a slot game called Gold, this is a very flashy affair. There’s nothing subtle about the visuals. In the base game, you’ll get a hint of Spandau Ballet’s classic hit of the same name. In the Free Spins feature, you’ll get the full Tony Hadley effect. It works surprisingly well.

The design might be a bit too much for more the understated among us. The gameplay can deliver some good action though thanks to the wild multipliers and the free spins round where all payouts are trebled. It won’t be for everyone but if you like a bit of bling while you spin you won’t go too far wrong with Gold. I do recommend you try Big Time Gaming’s MegaWays titles though with Holy Diver MegaWays the best of them.