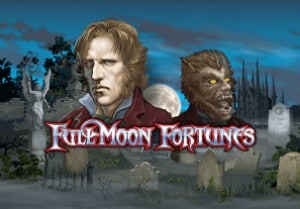 The imagery in Full Moon Fortunes has a Gothic horror feel - the reels are set against a graveyard and include symbols of paw prints and bullets as well as playing card values from K to 10. There's also an amulet symbol which can appear as stacked on every reel.

Keep an eye out for the Dr Blackwood symbol as he is the central figure in the Full Moon Bonus feature. When the Full Moon symbol lands on reel 5 it will transform Dr Blackwood into a multiplier wild - he will now substitute for any symbol with the exception of the scatter and can multiply any winning payline in which it appears by up to 5x!

That's just for starters though - prior to each bonus spin, you'll be transported to a graveyard where you get to pick gravestones which offer extra free games and increased multipliers. Once the free spins start, look out for Dr Blackwood - he will be wild for the duration of the feature and can boost connecting line wins with multipliers that can reach a whopping 25x.

The variance on offer in Full Moon Fortunes is on the high side - expect plenty of lean spells during the base game. Things can really perk up during the bonus round though. If you enjoy the horror theme, you'll find plenty to enjoy here. The graphics have a certain old school charm and the action plays out to a suitably creepy soundtrack complete with eerie bird calls.

According to legend, full moons can turn people into blood curdling werewolves. Get lucky with the full moons here and they deliver some pretty impressive payouts too. This is probably Ash Gaming’s best slot game and if you like the theme, Werewolf Wild by Aristocrat is a good option. If you like big multipliers in the feature though, you can’t go wrong with 300 Shields by NextGen Gaming.