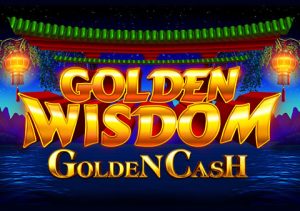 Classy design isn’t something we always associate with Ainsworth but they’ve done a decent job with Golden Wisdom Golden Cash. With a tranquil lake at night in the background, the reels are flanked by a pair of bobbing lanterns. On the reels are lower value royals well as a money tree, a fish and turtle. The frog and pig are the best symbols. Land 5 of these in combination for a payout of 8 times your stake. The dragon is the wild. This can hit on reels 2, 3, 4 and 5 only.

The first feature we’ll look at is the Golden Cash feature which is a streak respin round. It’s triggered by landing 6 or more of the golden peach symbol on the middle 3 reels on the same spin. The peaches, which all come with a cash value of between 1 and 50 times your stake attached, are held and 3 respins are awarded. If a new peach lands, the respins tally reset to 3. Once you’re out of respins, all the attached cash values are added to give you a final prize.

This upgraded version of the Golden Cash feature can strike at random on any spin. The process is the same. This time though, a giant block of golden peaches fills the middle 3 reels. This is the equivalent of 9 peaches. They all come with a cash value of up to 50 times your stake attached. They also offer a better shot of landing the Grand Jackpot, more of which shortly.

The Free Games feature is activated by landing 3, 4 or 5 scatters on the same spin. After a payout of 1, 5 or 10 times your stake, you’ll go on to play 8 free spins. The wild dragons on reels 2 and 4 can come with a multiplier attached which doubles the payout. Every time a scatter lands, 1 extra free spin is added to your tally. Payouts here are slightly lower than the equivalent in the base game.

Golden Wisdom Golden Cash offers a chance to land 1 of 4 jackpot prizes. To land the Mini, Minor or Major jackpot, you need to land 3, 4 or 5 Bonus symbols in the free spins round. The Grand Jackpot, which is worth £30,000, is triggered by landing a full screen of 15 golden peaches in the Golden Cash or Extra Bonus Golden Cash rounds.