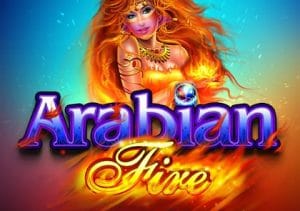 Hardly a feast for the senses

Like many Ainsworth slots, you’d be hard pressed to call Arabian Fire a thing of beauty. The visuals are pretty underwhelming. You’ll see K to 9 royals as well as a crescent moon, a flower and a heart. The flame-haired woman is the top standard symbol. Land 5 of her in a line for a payout of 6 times your stake. There’s also a wild that can land on reels 2, 3, 4 and 5 only in the base game.

The gameplay is rather more interesting than the design, starting with the Free Games feature which is triggered in the usual manner by landing 3, 4 or 5 of the treasure chest scatter on the same spin. After a payout of 2, 10 or 100 times your total stake, you’ll be awarded 6 free spins.

Appearing on reels 2 and 4 respectively are special multiplier wilds which boost payouts by 3x or 5x when they form part of a winner. Land both on the same free spin and the payout gets a 15x multiplier boost. Land 3 or more scatters for a retrigger and another round of free spins.

As well as the standard symbols, you’ll see gold opals with cash values of between 1 and 200 times your stake attached spinning around the reels. Land 5 or more of these on the same spin and you’ll activate the Loaded with Loot feature. The opals then join the queue to the right of the reels. 4 free spins on a new set of reels then follow.

If a silver or gold opal or a mini, minor or jackpot symbol land, they shift to the top of the queue, replacing the ones as the bottom which are nudged into the safe. The attached prize is then activated. You can add more free spins to your total in this round. When you’re out of free spins, all the amounts in the safe, plus any of the jackpots, are added together for your prize.

If you manage to land 10 gold opals during the Loaded with Loot feature, you’ll trigger the Grand Jackpot which is worth a cool £30,000.

Our initial impressions of the Arabian Fire slot weren’t very positive. The sound and visuals are rather disappointing. Things perked up a bit once we triggered the 2 bonus features though. The low to medium variance means it won’t be for everyone but if you like Ainsworth slots, then it’s one to consider. If you want Arabian action though, Sahara Nights by Yggdrasil Gaming is a much better alternative.