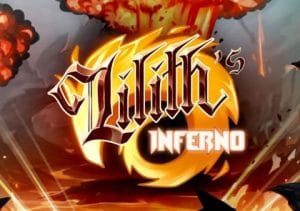 Lilith’s Inferno has the look of a typical Yggdrasil Gaming slot game. The angular designs are fresh and modern and there’s a rocking backing track. The reels are made up of playing card suit symbols and 4 higher value boss demons. The best of them pays 24 times your stake if you land 5 on a payline. The gold crown is the wild which replaces all the standard symbols.

The Gorilla head is the scatter. Land 3 or more of these on the same spin to trigger the Free Spins feature. You’ll then head to a new screen where Lilith throws jabs at a giant gorilla. Each one that lands adds 1 free spin to your total. With 3 scatters, you’ll get between 10 and 20 free spins. 4 scatters award 15 to 30 free spins with 5 scatters offering between 25 and 50 free spins.

The free spins then begin. Land 2 of the gold Vs symbols on the same spin and you’ll activate the Fight feature - a battle between Lilith and 1 of the 4 demon bosses. You’ll go to a new screen where the pair exchange blows. If Lilith wins, that boss symbol becomes wild for the rest of the round. You’ll also get 2 more free spins.

Each time a gorilla scatter lands on reel , it is collected. Once you have 4 of them, you’ll receive 4 extra free spins and bring a 3x multiplier into play which trebles the payouts on all remaining free spins. If you have 1 or 2 gorillas in the meter on your final free spin, they turn into wilds and are dropped onto the reels.

There’s plenty going on in Lilith’s Inferno. Trigger the Free Spins feature and there are plenty of stoppages as you wait for the free spins to be decided and the battle sequences to run out. At times we thought “just get on with it!”. That said, the free spins round can be a cracker. That’s certainly the case if Lilith wins multiple battles and brings extra wilds and more spins into play. Throw the 3x multiplier into the mix and the coins can quickly build.

The theme here might be demonic but we found the Free Spins feature to be anything but deadly. Get lucky there and Lilith’s Inferno can deliver some pretty fiery action – up to 3,968 times your stake on each free spin. If you want a demonic themed slot game with good win potential, try Vikings go to Hell (also by Yggdrasil Gaming).