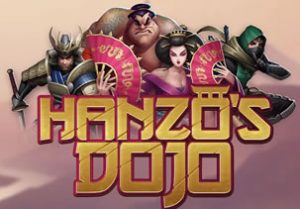 We’re usually in safe hands when it comes to the design of Yggdrasil Gaming titles and Hanzo’s Dojo is no exception. The reels are set within a traditional Japanese-style building. You’ll see an assortment of martial artists spinning around the reels including a fan fighter, sumo wrestler, ninja and samurai warrior. Above the main set is a the 3x1 Rooftop Slot - this is key if you want to unlock some of the game’s many features:

Expanding Wilds feature - land a wild in 1 of the 3 positions on the Rooftop Slot and it will expand and turn the whole of the reel below wild.

Free Spins feature - this round is triggered by landing 3 or more free spin symbols. Hope to see them appear in the Rooftop Slot on the triggering spin or during the feature as they deliver some special boosters. On offer are:

With its extra reel and array of extras, Hanzo’s Dojo appears a little complicated. We certainly recommend having a few spins in demo mode to get used to the rather unusual gameplay. Once you have got your eye in, there’s plenty to enjoy here.

The design is as high spec as you’d hope and the Free Spins feature offers lots of potential thanks to the boosters. There’s up to 811.8 times your stake to be won on each free spin which is good. Hanzo’s Dojo offers a fresh take on a classic Asian theme making it well worth a closer look. If you like Yggdrasil Gaming titles, Lucha Maniacs and Tut’s Twisters are worth trying.