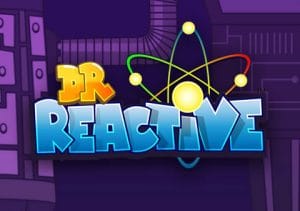 The grid is filled with brightly coloured flasks full of potion as well as a lightning bolt and a DNA sign. To create a winning combination, you’ll need to land a cluster of at least 5 matching symbols. The top symbol is the DNA. Land a cluster of 15 or more of these and you’ll win a payout of 50 times your total stake.

Dr Reactive uses a cascading reels game engine. After a winning combination is created, the successful symbols are zapped from the reels and new ones drop in from above to replace them. A new payout calculation then follows. If that results in new win, the process is repeated. The cascades continue as long as a new winner hits.

Joining the standard symbols is the W which is the wild. These can also come with multipliers of between 2x and 5x attached. In the base game, it disappears if it forms part of a win. Land more than 1 wild in the same winning cluster and the multipliers are combined.

If you land an atom symbol next to a DNA symbol, a reaction occurs. All the symbols on the column and row that includes the DNA are zapped and replaced. Each DNA reaction also awards a payout equal to 1x your total stake. Standard reactions then follow. This is called the DNA Reaction feature.

If an atom appears next to a lightning symbol, the Lightning Reaction feature takes place. This one removes the lowest value symbol on the grid from play. A new reaction then follows.

Each time you land a winning cascade, it’s added to the meter to the left of the reels. If you land 5 or 6 wins from a single spin, you’ll trigger the Free Falls feature and with it, 10 free spins. 15 free spins are on offer from 7 cascade wins in a row. Land 5 wins in a row during the feature to add another 5 free spins to your total.

The value of the wild multipliers increases during the free spins. Here they boost payouts by 2x, 4x, 6x, 8x or 10x. They don’t disappear following a winning cascade either. Instead, it remains on the grid but its multiplier value drops by 2x. It then disappears when it reaches 2x.

With its cartoon visuals and a soundtrack filled with bubbles and explosions, Dr Reactive looks like a very simple slot. It’s a bit more complicated than it looks though. If you get the chance, have a spin in demo mode to get used to the features.

The rather repetitive gameplay won’t be for everyone and if you’re a fan of classic fruit machines, then this probably isn’t for you. If you fancy trying something a little unusual, then a visit to the lab of Dr Reactive is recommended. Saying that, the most you can win is a whopping 65,001 x your stake – even though that’s highly unlikely.

If you fancy visiting another laboratory, Yggdrasil Gaming’s Nikola Tesla’s Incredible Machine slot is worth trying.