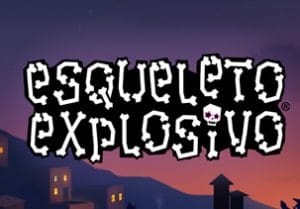 Mexican Day of the Dead theme

The design of Esqueleto Explosive (explosive skeletons in English) is absolutely superb - set in a Mexican backstreet, the reels are dominated by the 5 members of the skeleton mariachi band Enrico Mortis and the Boners. If the band members combine to form a winning combination, they are blasted away and new set of symbols drop into their place - these symbol drops keep on coming as long as there's a new winning combination on show.

Mucho Multipliers up to 32x

Even better is the fact that your payouts will be boosted by an increasing mucho multiplier the more times in succession you land a symbol drop win - it starts at 1x with your first win then increases to 2x with your second. More wins in a row will see your payouts boosted by 4x, 8x and 16x. If you're lucky enough to land 6 symbol drop wins on the bounce, then that payout will rocket courtesy of a massive 32x multiplier!

Keep a special eye on the sunglasses-wearing golden skull which is the game's explosivo wild, substituting for all other symbols - when it lands, it will blow up the 8 closest symbols and create a symbol drop and with it a new payout consideration. The multiplier will also increase by a factor of 1 following the explosion.

Esqueleto Explosivo is a pretty simple game - there aren't any free spins or other extra bonus rounds. All the action comes from the symbol drops and exploding symbols. The theme may be explosive but this slot shouldn't be too dangerous to your bankroll.

Even though you can expect plenty of smaller wins, big one are certainly possible thanks to the 32x multipliers – you can win up to 700 times your stake on every spin. The overall variance is in the middle.

Design wise, this is a fine effort - the images and animations are superb and the animations are silky smooth. The bouncy, mariachi soundtrack is equally impressive, punctuated by cheers of the crowd and blasts of fireworks. It really is a visual and aural feast.

It may not offer much in terms of features and you're unlikely to win life-changing amounts but Esqueleto Explosivo is a strange but hugely entertaining game and well worth a play. If you like the theme, Grim Muerto by Play ‘N Go and Day of the Dead by IGT are highly recommended.