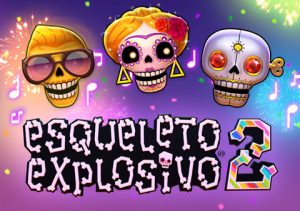 Thunderkick slots are usually full of visual flair that’s certainly true of Esqueleto Explosivo 2. The setting is a Latin American town at night. On the reels are a collection of beautifully designed skull symbols. The most lucrative of the 6 standard skulls is the one with blonde hair and big earrings (yes, really!). Land 3, 4 or 5 of these on adjacent reels and you’ll receive an award of 10, 20 or 50 times your total bet.

Central to much of the best action here are the Explosivo Wilds (the skull with the quiff and shades). This replaces everything apart from the scatter and the most lucrative standard symbol. When an Explosivo Wild lands, it explodes and in the process turns between 3 and 8 other symbols wild. A payout consideration is then made with the extra wilds in position.

After a successful combination hits, the winning symbols are removed and new ones drop in from above to replace them. If that creates a new winner, the process is repeated. These drops continue until no new winning combination is formed.

Landing successive symbol drop wins also brings a multiplier into play. Each spin starts at a standard 1x but successive wins can boost your payouts by 2x, 4x,8x, 16x or 32x (64x in the feature). The multiplier level also increases by 1 each time an Explosivo Wild lands. The multiplier reverts to 1x following a winless drop.

Free spins with multipliers up to 64x

Land 3, 4 or 5 of the clockwork skull scatter on the same spin and you’ll trigger the Bonus Game feature and with it, 10, 12 or 14 free spins. The Mucho Multipliers can have a big impact in this round.

Each time an Explosivo Wild lands, it’s collected in a meter. After you have 3 of them, the lowest multiplier from the list below the reels is removed. Your next set of symbol drops start with the next highest multiplier. You’ll also receive 1 extra free spin when a meter is filled.

If you manage to get enough wilds to make the 32x multiplier the base, you’ll get a single extra free spin with a massive 64x multiplier active. Re-triggers are possible too. Land 2, 3, 4 or 5 scatters to add another 3, 7, 10 or 12 free spins to your total.

We had high hopes when we heard that a sequel to Esqueleto Explosivo was in the offing. Thankfully, Thunderkick has created a cracking follow up. The design is as high end as you’d hope. The gameplay matches the design flair too.

The symbol drop wins, expanding multipliers, exploding wilds and free spins are a fine combination. They can deliver some potentially explosive action, especially during the free spins round where the multipliers can have a big impact. Payouts can reach up to 5,000 x bet per free spin in this volatile slot.

We liked the first slot in this series, Esqueleto Explosivo, and the Esqueleto Explosivo 2 has matched what’s in the original. On top of that, it has a higher RTP % (96.13% vs 96%), has free spins and a bigger potential multiplier (64x vs 32x). The win potential has gone from 700 x bet to 5,000 x bet. Superb job all round from Thunderkick.