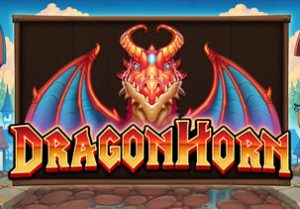 You can usually rely on Thunderkick for quality design and they haven’t disappointed with Dragon Horn which is a typically glossy looking offering. The action takes place against a medieval town backdrop. On the reels are 5 lower value shields plus an assortment of dwarves, elves, orc, knights and royalty. The top symbol is the red dragon. Land 3, 4 or 5 of these on adjoining reels for a payout of 3, 5 or 20 times your total stake.

There’s also a wild, the W symbol, that replaces everything bar the scatter. This can hit anywhere apart from reel 1. Keep a special eye out for the Dragon Fire symbols. These all transform into the same matching symbol whenever they hit and can create some big winning combinations.

The main feature in Dragon Horn is the Bonus Game feature. It’s triggered by landing 3 or more of the Dragon Horn scatter on the same spin. You’ll then receive 7, 9 or 11 free spins. Each time a Dragon Horn scatter lands during the feature, it is collected in a meter above the reels as well as adding 1 extra free spin to your total. Fill the meter and you’ll progress to the next level.

Dragon Horn is a typically well-designed slot game from Thunderkick. The glossy visuals are superbly done and the soundtrack is an ideal match. The gameplay is relatively simple with the best potential action coming via the Bonus Game feature.

The key to success there is getting through the levels and activating multiple mystery shields. If you don’t manage to do so, the results in the feature can be pretty meagre. Get to the latter levels early in the proceedings and the mystery symbols can deliver plenty of magic – up to 8,282 times your stake on each free spin. This is a highly volatile game and we found the action to be of the feast or famine variety.

Dragons appear all the rage with developers at the moment. This one from Thunderkick should last the test of time. If you want a slot game that delivers plenty of fiery volatility, then Dragon Horn shouldn’t disappoint. I also suggest you try Dragon Born by Big Time Gaming which is 1 of my favourites.