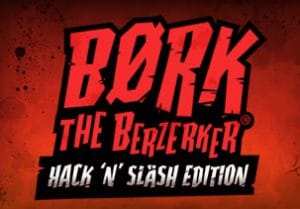 The Norse legend theme is popular with slot game developers with Børk The Berzerker Hack ‘N’ Slash another title to hit the online casino shelves. Created by Thunderkick, it’s a 5 reel, 20 payline slot game that comes with expanding wilds and a bonus round that awards up to 20 free spins. Play on all devices from between 10p and £100 per spin.

If the Børk The Berzerker name has a familiar ring to it then it should - this Hack ‘N’ Slash Edition is an updated version of the original release with a few minor tweaks added here and there. As a result, the original version has been discontinued.

Anyway, the design is as high-end as we’ve come to expect from a Thunderkick title. The reels are made up of 3 lower value Norse letter characters, 3 grotesque sea monsters and a sea maiden. This damsel in distress is the top payer, awarding 3, 7 or 50 times your total stake if you land 3, 4 or 5 across a payline.

Central to the action is Børk The Berzerker who is wild - appearing on reel 3 only in the base game, Børk expands to fill the whole of the reel whenever he hits. This is called the Expanding Wild feature.

The purple creature who looks like he’s about to strangle someone is the scatter - this character is the key to unlocking the game’s Bonus Game feature. Land 3, 4 or 5 and you can look forward to 10, 15 or 20 free spins. Boosting your winning chances in the feature is Børk.

Rather than just landing on the middle reel, he can hit on reels 2, 3 and 4 during the free spins - he performs his usual expanding wild functions if that would result in a winning combination being created. This means you can get up to 3 fully wild reels on every free spin.

It’s largely a case of ‘if it ain’t broke, don’t fix it’ with Børk The Berzerker Hack ‘N’ Slash - the classy, cartoon design is virtually identical and again looks excellent. There’s been the odd slight amendment to the features but the extras that made the original an excellent game are largely intact. The variance is in the medium to high range with possible wins of 2,100 times your total stake on each spin.

There are many Norse-themed slot games but this one is a far more laid-back affair, as much Scooby Doo as a Scandinavian saga. It’s not Thunderkick’s most outlandish release in terms of design or extras but Børk The Berzerker Hack ‘N’ Slash remains a very playable option. If you want volatile Norse themed slot games, you cannot go wrong with Vikings Go Berzerk by Yggdrasil Gaming or Thunderstruck II by Microgaming.