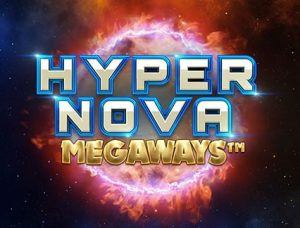 The set up in Hypernova MegaWays is straightforward. Set against a deep space backdrop, you’ll see lower value royal values as well as a collection or more rewarding gemstone symbols. The diamond is the best payer. Land 2, 3, 4, 5 or 6 on adjacent reels and you’ll pocket an award of 2, 5, 10, 30 or 100 times your stake. Helping to create the winners is a wild. This replaces all the standard symbols.

As this is a MegaWays slot game, the number of symbols you’ll see varies from between 2 and 7 on each spin. The number of ways to create a winning combination varies too. The minimum is 324. If the reels reach their maximum configuration, you’ll have 117,649 ways to win in play. Every win activates the Cascading Reels feature – this sees winning symbols replaced with new symbols for consecutive wins.

Hypernova Megaways comes with a Jackpot Respins feature. To trigger it, you’ll need to land 6 or more of the supernova scatter on the same spin. Those scatters will lock in position. 3 respins are then awarded. If a scatter lands during those respins, it too is held and the number of respins resets to 3. The Jackpot Respins continue until you’ve played all your respins or you’ve managed to fill all the positions on the grid.

The cash values attached to each scatter (up to 100 times your stake) are added together to make up your final award. Look out too for special trophy scatters which award jackpot prizes:

You can land more than 1 of the bronze and silver trophies on the same set of respins. Only 1 each of the gold and platinum jackpots can be won in one go. The maximum prize in the Jackpot Respins feature is an impressive 6,250 times your stake.

In theory you could win bigger in the base game which offers single spin prizes which can top 8,641 times your stake! This is pretty simple for a MegaWays slot game. The Jackpot Respins feature might be the only main feature but it can be well worth landing, especially if the trophies make an appearance. Get lucky there and Hypernova MegaWays can serve up some out of this world action. If you want something different, Kingmaker by Big Time Gaming uses the MegaWays game engine as well as huge multipliers.