Recommended casinos to Play Wild Tome of the Woods 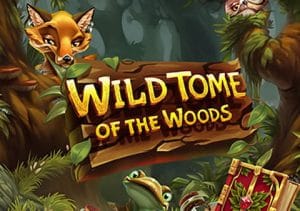 Wild Tome of the Woods: Head to an ancient woodland

High spec design is a given for a Quickspin slot game and Wild Tome of the Woods matches those high expectations. The visuals here are excellent as usual. A dense forest forms the backdrop to the action. On the reels you’ll find 3 lower value bottles of potion as well as a frog/newt hybrid called Crickey, a fox called Sly and a posh owl called Eleanor. Land 3, 4, 5 or 6 of the owl in combination for a payout of 1, 2, 6 or 16 times your total stake. There’s also a standard wild that replaces all symbols as well as offering awards of up to 20 times your stake per payline.

The symbol you’ll really be hoping to see here is the book of spells aka the Wild Tome. When this lands, the Wild Tome feature is triggered - 1 of the standard symbols is chosen at random. All instances of this symbol on the reels then also turn wild.

Wild Tome of the Woods: All Wilds Win feature

If a wild symbol turns into a Wild Tome, then the process is repeated which can lead to a chain reaction of wilds and even bigger potential rewards. The goal is to turn the whole of the reels grid wild. In that happy circumstance, you’ll activate the All Wilds Win feature which delivers a jackpot payout of some 1,000 times your total stake.

It might not have much in the way of traditional bonus features but there’s plenty of potential action in Wild Tome of the Woods. You’ll see plenty of stacked symbols which can really come into their own if you land a Wild Tome and that stack is the chosen symbol. The variance here is in the medium verging to high range.

The theme might be a little too cutesy for some tastes. The sound and imagery are excellent as usual though. The gameplay is very straightforward but get on a roll with the Wild Tome transformations and you could end up with some magical results. If you want something with bigger potential rewards, Eastern Emeralds by Quickspin would be my choice.