Recommended casinos to Play Skulls UP! 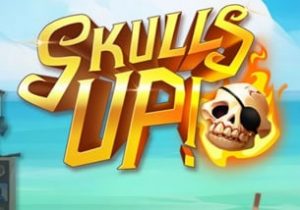 As usual for a Quickspin slot, there’s a top spec feel to the design in Skulls UP! With palm trees, blue seas and a sandy beach in the background, the reels contain A to 10 royals plus members of the pirate crew. There’s Biscuit the parrot, Wrench the monkey and a pair of shipmates called Smelly and Biggie. The most rewarding symbols it the female skipper No Beard who pays 2, 4 or 20 times your stake if you land 3, 4 or 5 on adjoining reels.

The skull is the wild. This replaces all the standard symbols in the base game. There’s also a flaming skull wild. Whenever 1 of these symbols land you’ll trigger the Skulls UP! Re-Spin Feature.

Above the main reels you’ll see a 3x3 ship’s sail grid. When the Flaming Skull wild lands, 1 of these positions on the sails is opened up and a re-spin is awarded. This expansion also increases the number of potential ways to win. The re-spins continue as long as there’s a flaming skull wild or a standard skull wild on the grid. If the reels expand to their maximum size, you’ll have 1,944 ways to win.

The Flaming Free Spins feature is triggered by landing 3 of the treasure chest scatter symbols on the same spin – you will begin with 6 free spins. If you manage to open up a position above the main set with the flaming skull wilds, then that position remains open for the rest of the round.

Standard skull wilds also increase the size of the reels even if the wild skulls aren’t active. If you manage to expand a reel to its fully expanded height, another 2 free spins are added to your total. This means up to 10 additional free spins which takes your tally to 16.

The pirate theme is as old as it gets in the online slots world. The Skulls UP! slot offers something different from its gameplay which makes it a good choice if you fancy something a little unusual. It should also appeal to players who like high risk but potentially high reward play.

This is a volatile slot and the variance is high – you can win up to 3,650 x stake on each re-spin or free spin. As well designed as we’ve come to expect from a Quickspin slot, Skulls UP! is an innovative take on a classic theme. The RTP is decent at 96.26% too.

For the best pirate slots, we recommend you try the following 2: