Recommended casinos to Play Hall of the Mountain King 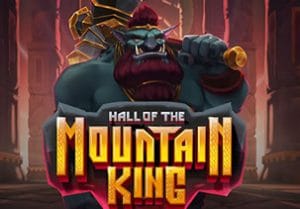 As usual for a Quickspin slot game, the design here is terrific. Set against a mountainous backdrop, you’ll see Norse-style A to 10 symbols as well as 5 higher value troll-like creatures. The best of these is the one with the big red beard. This pays 2, 7.5 or 40 times your total stake if you land 3, 4 or 5 on a payline.

Those same amounts are on offer from the wild which can land on all 5 reels and replace all of the standard symbols. Wilds are central to the first of the extras we’ll look at.

Multiplier Meter feature - to the side of the reels you’ll see a meter which displays multipliers from 1x through to 5x. Each wild that lands lights up 1 block on the meter. If you land a winner, the payout is then boosted by the multiplier that’s live.

Stacked Wilds feature - these can fill whole reels and turn them wild. Perhaps more importantly they can give the Multiplier Meter a real leg up.

Free Spins feature – this round is triggered by landing 3 of the king’s hammer scatter on the same spin. You’ll then play the first of 3 potential stages. Land a winner in stage 1 or 2 and the king will break a block in the upgrade meter. He can also break the bottom block of the multiplier meter which upgrades the value of all the multipliers – it can reach 15x. When the kings breaks, the top block in the upgrade meter you’ll progress to the next level. Here’s what’s on offer in each of the 3 stages:

Hall of the Mountain King is another impressive release from Quickspin. The visuals are superb as usual and you’ll hear Grieg’s music playing as you spin. Even if you don’t know the piece by name, it’s familiar enough to have you nodding along.

There’s plenty of variety on offer from the features too. If you like volatile action, then you won’t be disappointed either as this is a high variance game – you can win 7,326 times your stake on each free spin the potential 15x multiplier. Put all that together and you have a cracking combination which makes a trip to the Hall of the Mountain King one that’s well worth making. If you like big win potential, Quickspin’s Divine Dreams is my preferred choice.