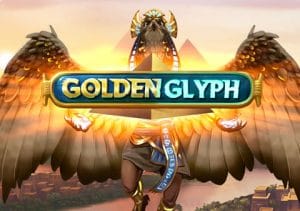 The action in Golden Glyph takes place on a 7x7 grid. The Tumble Mechanics feature (tumbling reels) is used so symbols are removed following a successful spin and replaced by ones from the above. The tumbles keep on coming as long as a new winning combination is created. On the reels you’ll see an assortment of hieroglyphs, Egyptian deities, queens and Pharaohs. It’s very impressively done.

After a winning cluster is removed, 1 Power Wild will drop into one of the vacated positions. If a winning combination then lands that includes the Power Wild, a Power-Up is awarded. This is called the Power Wild feature. There are 4 Power-Ups to benefit from (the Power-Up feature):

Golden Glyph is rather complicated for a Quickspin slot game. The Power-Ups can spice up the base game though and there are some potentially massive rewards on offer in the Free Spins Bonus feature if you manage to level up and get the multipliers moving. Payouts there can reach 13,185 times your stake! The variance is in the medium range. It’s definitely recommend if you like the ancient Egyptian theme – it’s pretty good for a first attempt at a grid slot.