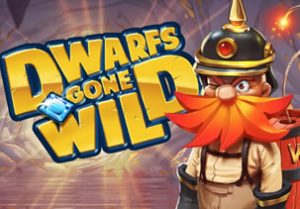 Quickspin are up there with the best when it comes to the design of their slot games and Dwarfs Gone Wild is another cracker on that score. Set against a mine shaft backdrop, you’ll see the usual lower value royal values plus the 7 dwarfs. Don’t expect to see Grumpy, Happy, Dopey and the rest of the usual gang - instead you’ll see Banker, Bomber, Racer, Huntsman, Blacksmith, Wizard and Strongman.

Every time you land a winner that includes a dwarf, it’s collected in a meter to the side of the reels. Fill the meter and you’ll be awarded a Golden Minecart. This becomes important when you trigger the Golden Minecraft Free Spins Bonus feature - more on that shortly.

Magic Mirror feature - this is triggered by landing Snow White on the middle reel. You’ll then be awarded 2 respins. During those respins, 300 of the top paying Snow White are added to the reels. This allows you to hopefully fill the reels with the most rewarding symbol.

Golden Minecraft Free Spins Bonus feature - land the bonus scatter on reels 2, 3 and 4 on the same spin and you’ll receive 7 free spins. It’s here that the collected Golden Minecarts come into their own. Each cart awards a special dwarf modifier extra which can be awarded at random at the start of each free spin:

You won’t find many better-looking slot games than Dwarfs Gone Wild. The 3D visuals and super slick animations are as good as you’ll find anywhere. The features match those impressive looks too, especially the Golden Minecraft Free Spins Bonus feature where the dwarf extras can quickly do their stuff. The overall variance is in the medium to high range with top payouts of 2,535 times your stake on each free spin with a 5x multiplier.

Combining high spec design with a raft of impressive extras, Dwarfs Gone Wild is an excellent title. This modern-day reworking might not pleases traditionalists but for slot games players it does the job just fine. If you like the theme, Boom Brothers by Net Entertainment is recommended.