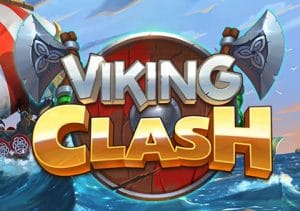 The design here is impressively done. With rough ocean seas and a Viking longship in the background, you’ll see lower value rune stone symbols as well as an axe, a hammer and 6 members of the Viking crew. The best of them are the pair with red beards which both offer awards of 1, 3.6 or 16 times your stake if you land 3, 4 or 5 on a payline. There are 2 sets of reels in play here, red at the top and green below. Viking Clash comes with a pair of features.

Wild Ship feature - this can trigger at random following any base game spin. A wave will flow across the reels and leave a trail of between 2 and 5 wilds in its wake. These wilds then shift 1 reel to the left and a new payout calculation is made each time until all the wilds have dropped off reel 1.

Viking Clash is a superb looking game. The cartoon-style visuals are impressively done and there’s stirring backing track playing in the background as you spin. The gameplay here is a little unusual, starting with the 2 reel sets. The Wild Ship feature lands more regularly of the 2 extras and can deliver some decent rewards.

The best action comes via the Viking Battle Free Games feature where the wild extras and multipliers can really come into their own. Medium to high variance, you can fight your way to 13,200 times your stake on each free spin!

The Norse theme is very popular in the online slot game world. With its top design and funky features, Viking Clash is an impressive addition. If you want to play with Norse warriors, Vikings from Net Entertainment is the official slot game from the television series.