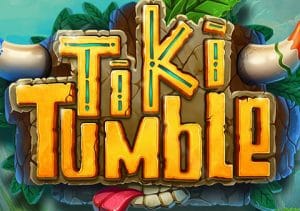 Push Gaming slots games are usually easy on the eye and that’s true of Tiki Tumble which looks terrific. With carved stone statues and volcanoes billowing ash in the background, the reels include 4 lower value gem symbols and 4 more lucrative mask icons. The most rewarding of these is the pink icon which offers payouts of up to 20 times your total stake per payline.

More rewarding still is the wild which pays 25 times your stake if you’re lucky enough to land 5 across a payline. These wilds spin in stacked formation and are central to the game’s 2 main extras.

Nudging Wilds feature - this becomes active when part of a wild stack lands anywhere on the top 3 rows. The wilds on that reel will then nudge down 1 position at a time while the other reels spin normally. The nudges continue until the wilds drop off the bottom of the reels.

Free Games feature - this is triggered by landing 3 or more of the gold death mask. Again, nudging wilds feature heavily. You’ll start with stacks of wilds on reels 2 and 4. Wilds can hit on the other reels as normal. The nudges follow with each free spin. Each nudge also increases a multiplier which is applied to any payouts on that free spin. The free spins keep on coming until all the wilds have dropped off the reels.

We found that Tiki Tumble delivered some pretty high variance action. You can expect some lengthy down spells. Trigger the Free Games feature though and land some extra nudging wilds and the multipliers can do their stuff. There are top wins of 3,358 times your stake to be won from each free spin.

Well designed and boasting an innovative feature round, Tiki Tumble offers something a little different. If you enjoyed Push Gaming’s Blaze of Ra, then this slot game should offer similar, volatile appeal.