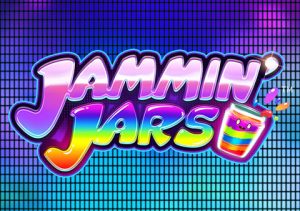 The reels in Jammin’ Jars are a feast of colour. On the 8x8 reel grid you’ll see blueberry, plum, apple, raspberry, orange and strawberry symbols. To land a winning combination, you’ll need to land 5 or more matching symbols in a horizontal or vertical cluster.

The multi-coloured jam jar is the wild. When this forms part of a winning cluster, it shifts to an adjacent position before the next collapse occurs. When that collapse happens, the wild locks in place. The wild also comes with multipliers which increase by 1x with each successive cluster win.

The Jam Jar also acts as the game’s scatter. Land 3 or more of them on the same spin and you’ll trigger the Free Games feature. The Jam Jars have same wild and multipliers properties as in the base game. Get on a roll here and coins can quickly build.

The other extra to look out for is the Rainbow feature which can trigger at random following any winless spin. A colossal fruit symbol is dropped onto the reel which could help create a new cascade win.

Jammin’ Jars owes as much to social media games as it does to traditional slot games. The bright and bold visuals are simple but nicely done, backed by a bouncy backing track. The gameplay isn’t bad either if you like this sort of game and the medium to high volatility means it can deliver a pretty tasty payout punch.

If you’re a fan of traditional fruit machine style games, then this will be one to avoid. If you fancy trying something a little different, then Jammin’ Jars is a decent enough place to start. It’s become a bit of a cult favourite as it offers potential wins of 20,000 times your stake on each spin or free spin. I would also suggest you try Push Gaming’s Razor Shark which offers even bigger payouts.