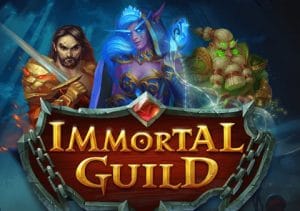 A lush green woodland forms the backdrop to the action in Immortal Guild. The reel grid includes bronze, silver and gold coins as well as crossbows, amulets and swords. The best paying symbols are the 3 members of the Immortal Guild – the Hunter, Mage and Warrior. Land a combination of 3, 4 or 5 of the Warrior and you’ll pocket an award of 1.2, 2.4 or 6 times your total stake.

A rather unusual Collapsing Reels feature is in use here. To trigger a collapse, you’ll need to land 2 or more of the same matching character symbol on top of each other. The symbols then collapse down to the lowest of the triggering combination.

You can then look forward to a respin complete with a multiplier that’s equal to the number of special symbols from the triggering spin. For example, if you landed 3 Warrior symbols in a vertical stack, they’d drop down to a single symbol. A respin then follows complete with a 3x multiplier.

The other main extra here is the Free Games feature which is triggered by landing 3 scatters on the same spin. Your reward is 7 free spins. Entering the action here is the wild lion symbol. These become active when you land 2 or more matching Hunter, mage or Warrior symbols on top of each other.

Just like the base game, the stack of symbols collapse. This time though, they turn into a wild rather than a standard symbol. The usual respin follows, complete with the multiplier boost.

Like most slot games from Push Gaming, the design here is nicely done. The gameplay is rather unusual though. We’ve played plenty of collapsing reels slot games but none have quite the same combination of respins and multipliers found here.

Fans of the sword and sorcery theme are very well catered for when it comes to slot games. If you enjoy that theme, then Immortal Guild is worth a look. Medium to high variance, you can win a whopping 50,000 times your stake on each spin or free spin with the multipliers!

If you want big wins, the cult favourite Jammin’ Jars (by Push Gaming) offers payouts of 20,000 times your stake per spin. If it’s sorcery and fantasy you’re after, Raiders of the Hidden Realm by Playtech should do the trick.