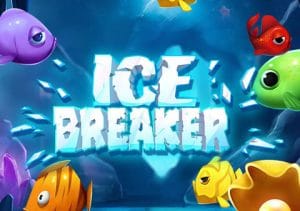 There’s a classy, cartoon look to the visuals in the Ice Breaker slot game. Set against a cartoon polar backdrop, you’ll see lower value A to 10 symbols and 5 more rewarding fish encased in ice. The best of the these is the red fish which pays 1, 3 or 10 times your total stake if you land 3, 4 or 5 on adjoining reels. The clam is the wild - this appears on reels 2, 3, 4 and 5 only and replaces other normal symbols.

Cascading reels, with a difference

Ice Breaker uses the Collapsing Reels feature. It’s not quite a standard cascading reels game engine though. Land 2 or more of the same symbol on top of each other on the same reel and they collapse downwards and combine to form a single fish symbol in the bottom position on that reel.

Land 3 of the hammer scatter on the same spin and you’ll trigger the Free Spins feature. On offer here are 6 free spins. During these free spins, all the lower value A to 10 symbols are removed from the reels. With just higher value fish in play, you’ll have a much better chance of bringing the cascading reels and multipliers into play. Re-triggers are possible here too.

At first glance, Ice Breaker looks like a standard cascading reels slot game. The way the multipliers are created offers something a little different though. Get on a roll with these and the coins can quickly build, especially in the Free Spins feature where you can win up to 25,000 times your stake on each free spin!

The gameplay can be quite repetitive so if you like a variety of extras, you won’t find that here. If you like simple gameplay and cascading reels, then Ice Breaker should appeal. If you want big wins and good bonus features, Push Gaming is a good slot provider to choose – I recommend you try Razor Shark which offers 50,000 times stake wins.