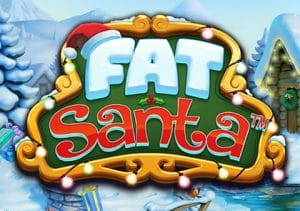 The design in Fat Santa is terrific. Set against a wintry backdrop with a log cabin to the side, the reels are made up of bauble style playing card suit symbols as well as a gift box, a snowman and a reindeer. Santa’s helper is the best of the standard symbols, paying 20 times your stake if you land 5 in a line.

Fat Santa is the game’s wild. He also offers awards of up to 20 times your stake per payline as well as substituting for all the standard symbols. There are a couple of festive treats on offer in Fat Santa.

Santa’s Sleigh feature - this can trigger at random on any spin. Santa will fly across the screen on his sleigh and drop wild mince pies onto the reels below. The reels then spin as normal with the new wilds locked in position.

Free Games feature - land a wild Santa and a wild mince pie symbol on the same spin and you’ll activate the bonus round and with it, 5 free spins. Land a mince pie during the feature and it moves towards Fat Santa who eats it and adds to the Pie Meter. The more pies Santa eats, the bigger he gets. This also adds extra free spins to your total. You’ll have the chance to buy the free spins round if you wish. This will set you back 40 times your stake.

Many Christmas-themed slot games overdose on sugar and schmaltz but Push Gaming has got things about right here. There’s a jolly feel to the sound and visuals but it’s not too OTT. The gameplay is straightforward but the added wilds and the colossal wilds in play in the free spins round can be well worth hitting. The variance is in the medium range with top wins of 6,405 times your stake on each spin or free spin.

Push Gaming has done a pretty good job with Fat Santa. If you fancy playing something festive, then it does the job rather nicely. If you enjoy Christmas, Taco Brothers Saving Christmas by ELK Studios is a great slot game to play.