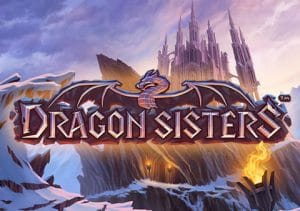 The action in Dragon Sisters takes place over 2 sets of 5 reel, 25 paylines machines. The top set features the fire dragon imagery while the bottom features the ice dragon. On both reel sets, you’ll see a similar assortment of dragon egg symbols as well as swords and other weaponry. The visuals aren’t as slick as you’ll see in some slot games but are more than adequate. The 2 sets of reels on top of each other are ideally set up for play in portrait mode on a mobile device.

Dragon Sisters isn’t overloaded with extras. The Dragon Respin feature is central to the action. There are 2 types on offer with a different extra awarded depending on where the respin was triggered.

Landing the Red Dragon in the top position of the middle reel on the fire reels will activate a free respin on the bottom reel set. The animated dragon then blows fire onto the bottom set of reels, turning the whole of reel 3 wild in the process. A respin then follows with the stacked wild in position. No new instances of the red dragon will stop the respins.

It’s a similar story with the Blue Dragon which is triggered by landing the Blue Dragon in the top position of reel 3 on the bottom set of reels. Fire is blown onto those top reels and up to 3 positions will turn wild. A respin follows with the wilds in position. The respins continue until no more new blue dragons have appeared.

The Dragon Sisters slot might not offer a huge range of features and bonus rounds but these dragons can still cook up some pretty fiery action. This is a volatile slot game - high risks can deliver big rewards though, with possible payouts of 1,258 times your stake on each spin or respin. The limited gameplay won’t be for everyone.

We rather liked Dragon Sisters though. It’s a simple but exciting take on the classic fantasy theme. If you want dragons, Dragon Born by Big Time Gaming is excellent and was the first ever Megaways slot game.