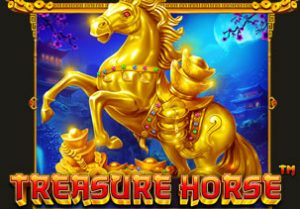 There’s a traditional feel to the design in Treasure Horse. With a valley shrouded in mist in the background, you’ll see 7 different standard symbols spinning around the red and gold reels. In order of value are single, double and treble bars, a plant in a pot, the lucky 88 logo and a money envelope.

The best of the standard symbols is the coin which awards around 22 times your total stake if you land 3 on a payline. There’s also a wild that substitutes for everything bar the scatter. Land 3 of these on a payline and you’ll win just under 60 times your stake.

The main feature here is the Free Spins feature which is triggered by landing 3 of the golden horse symbol on the same spin - you’ll then receive 8 free spins. These take place on a new machine that now includes a fourth reel. Instead of standard symbols, the fourth reel is made up of multipliers.

Whatever winning combination lands is boosted by the amount shown on the multiplier reel. This can be anything from 2x up to 6x. Each time a golden horse symbol lands during the feature, 1 extra free spin is added to your total. There are no limits to how many additional free spins can be won.

Treasure Horse is a simple but very playable game. The visuals are nicely done and the traditional backing track gives the game a classical feel. The gameplay is pretty straightforward but the Free Spins feature offers some good potential, especially if you get on a roll with the multiplier wins. Medium to high variance, there’s a whopping 6,000 times your stake to be won from each free spin with a 6x multiplier!

We enjoyed Treasure Horse. The gameplay is basic enough but it can deliver a decent enough kick in the bonus round to make it worth a spin. I also suggest you try Hot Safari, from Pragmatic Play, which also uses a multiplier reel.