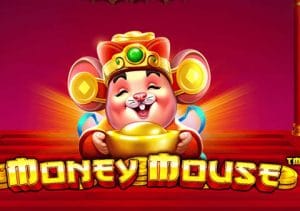 The Chinese New Year celebrations form the backdrop to the action in this colourful and nicely designed slot. With fireworks exploding in the background, the reels are set within a traditional pagoda-style building. On the deep red reels, you’ll see royal symbols plus peaches, drums and firecrackers.

The top standard symbol is the dancing dragon’s face which awards 1, 10 or 20 times your stake if you land 3, 4 or 5 on a payline. Those same amounts are on offer from the Money Mouse which is the wild.

The golden money tree is the scatter. Land this symbol on reels 1, 3 and 5 on the same spin and you’ll receive 5 free spins in the Free Spins feature. During those free spins, the middle 3 reels are filled with colossal 3x3 symbol blocks which can create some massive combinations. You can also retrigger infinitely.

The Money Mouse slot also offers the chance to land a jackpot prize. The Money Respin feature is triggered by landing 6 or more of the lantern symbol on the same spin. The lanterns are held and a series of 3 respins follow. The reels include only blanks and lanterns on these respins. If a lantern lands, it’s held and the respins revert to 3.

You’ll see that each lantern comes with a coin value attached. When your respins are complete, all the coin values are added together for your overall win. If you fill all 15 positions with lanterns, you’ll scoop the Grand Jackpot prize which is worth a cool 1,000 x stake. You can also win the Minor and Major jackpots which are worth 30 and 100 x stake.

Pragmatic Play has kept things relatively simple in Money Mouse. There’s nothing revolutionary about the features which you’ll have seen in plenty of other slots. The free spins with colossal symbols and the jackpot round offer enough action to keep things interesting though – well up to 500 times your stake.

As far as variance goes, we’re in the medium range – the biggest wins will come from the Grand Jackpot (1,000 x stake). The Chinese theme remains enduringly popular. This one isn’t especially original and doesn’t offer big enough payouts, from each spin or the jackpots, to make it a game to come back to. Pragmatic Play has deliver much better slot games – their most popular is the volatile Pirate Gold which offers 32,270 x stake wins on each spin.