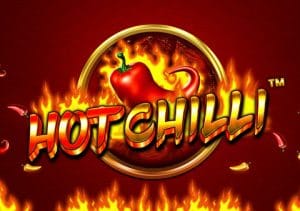 Hot Chilli looks a little unusual. The 3x3 reels are set within what looks like an ornately designed cooking pot that’s edged by golden dragons. Rather than spinning, symbols magically appear in position. Not every position will be filled on each spin. You can expect to see plenty of blanks. The symbols on show here have a Chinese culinary feel.

In order of value are single, double and treble chunks of tofu, green, orange and red tomatoes, slices of meat and pieces of fish. Landing combinations of 3 matching food groups creates a winning combination. 3 fish symbol on a payline delivers just over 11 times your total stake.

Joining the action are 4 chilli symbols. These come with 2x, 3x, 4x and 5x multiplier values attached. Any 3-symbol combination of chillies is good enough to create a winning combination. Obviously, the higher the multipliers the better the potential rewards. The top paying combination 2x, 5x and 2x chillies in reels 1, 2 and 3 will turn a minimum stake spin of 9p into a bumper payout of some £50 (555.55 times your stake).

The paytable is on show at the side of the reels at all times so you can keep track of what’s going on. That’s your lot as far as gameplay goes. Hot Chilli is a simple dish. It’s not garnished with flavoursome features. All the action comes via the base game.

You might expect a slot game called Hot Chilli to be an extremely volatile one. That’s not really the case though. The variance here is in the medium to high range which is fiery enough to keep things interesting but not too scorching. You can win up to 888.88 times your stake if you fill the reels with the biggest chilli multipliers which is decent.

This is a very straightforward offering. That lack of extras means it won’t be to all tastes. It’s decent enough but Hot Chilli won’t have the lengthiest of shelf lives. If you like the Chinese theme, then this unusual game is worth a look though.

There are much better Pragmatic Play slot games available though – The Dog House and Medusa Strike would be my recommendations.