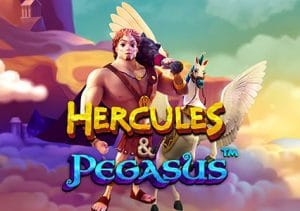 The design in the Hercules & Pegasus slot game is done cartoon style. Joining the A to 10 royal values on the reels are a pottery urn, a harp and a Greek temple building. The best standard symbol is the Hercules & Pegasus logo which pays 0.1, 2, 10 or 20 times your stake if you land 3, 4 or 5 on 1 of the game’s 20 paylines. More rewarding is the wild which pays 25 times your stake for a 5 on a line combo.

On any base game spin, you could land a special random spin feature. Choose from the 3 scrolls to see which extra you’ll receive:

Hercules & Pegasus comes with 3 different free spins features. It’s triggered by landing the bonus symbol on reels 1 and 3 plus the Hercules, Pegasus or both symbols on reel 5.

An unlimited number of free spins are awarded in the Hercules Free Spins feature. Each time a red potion symbol lands on reel 5, extra wilds are added to the reels. They go up in increments of 5, 10, 25 and 50. The round continues until you’ve landed the red potion symbol a 5th time.

Again, an unlimited number of free spins are on offer in the Pegasus Free Spins feature. This time, instead of extras wilds, a multiplier increases every time a blue potion symbol appears on reel 5. This boosts payouts by 2x, 3x, 4x and 5x. You’ll keep on spinning until the 5th blue potion bottle appears.

Trigger the Hercules and Pegasus Free Spins feature and you can benefit from both the added wilds and the rising multipliers. The free spins here continue until either the red or blue potion bottle lands a 5th time.

There’s plenty going on in the Hercules and Pegasus slot. The cartoon-style visuals are impressively done, and the modifiers and bonus rounds offer plenty of variety. The variance is in the medium range, nudging towards the high – you can win up to 2,500 times your stake with the 5x multiplier in either the Pegasus Free Spins feature or the Hercules and Pegasus Free Spins feature.

If you want more slots based on Greek mythology characters, Playtech’s Age of the Gods: Mighty Midas would be my recommendation.