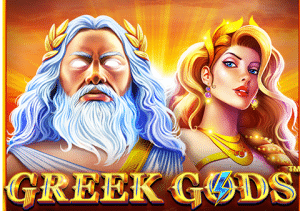 Pragmatic Play has created a cracking looking slot in Greek Gods. With sun-kissed, cloud-filled skies in the background, Mount Olympus, the reels are enclosed with a marble temple building. There you’ll find A to 10 royals alongside a goblet, a harp and a goddess (Hera). The Greek God, Zeus boasting a fine white beard, is the most lucrative symbol. Land 5 of these on adjoining reels for a payout of 6 times your total stake. There’s also a wild that can appear on all 5 reels.

Above reels 3, 4 and 5 in the base game you’ll see a series of special random awards. Land a full stack of scatters and you’ll activate the prize directly above. Called the Random Awards feature, you could an instant cash win of up to 50 times your total stake or trigger the Wheel of Fortune Bonus feature or Free Spins feature.

Land this feature and you are guaranteed to win a prize of between 10 and 1,000 times your total stake – if you trigger the feature with full stack of scatters on reels 3, 4 and 5, you’ll get 3 spins of the bonus wheel.

You can trigger the Free Spins feature via the Random Awards above the reels or by landing 5 or more scatter symbols on the same spin. 3 free spins plus 1 for each scatter from the triggering spin. 5 scatter symbols would mean an initial haul of 8 free spins. The maximum allocation is 36 free spins – 24 from the random awards plus 12 from the scatters.

The Random Awards feature is in play during the free spins. In fact, you’re more likely to land them here than in the base game as they can trigger on reels 1 and 2 as well as reels 3, 4 and 5. It’s possible to land re-triggers of up to 40 free spins from a single free spin – with no limits!

The impressive visuals and sweeping soundtrack give the Greek Gods slot an epic feel which matches the theme very nicely. The gameplay is simple enough but the Random Awards, Wheel of Fortune Bonus and Free Spins keep things moving.

It’s pretty fiery too with the variance in the medium to high range- filling the reels with Zeus symbols will pay out 1,458 times your total stake. Put all that together and Greek Gods is a top addition to the myth and legend catalogue. Other options include Playtech’s Age of the Gods: Mighty Midas and Blueprint Gaming’s Gods of Olympus Megaways.