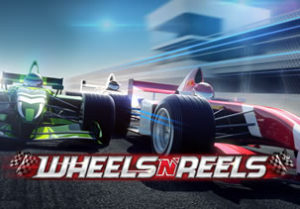 The design in Wheels N’ Reels is pretty good. The reels are set against the backdrop of a motor racing circuit and a crowd of adoring fans. On those reels you’ll find A to J royal values plus symbols relating to the Formula One theme. They include a driver’s helmet and a trio of racing cars. You only need to land 2 of the car symbols to create a winning combination.

The best of these standard symbols is the red car. If you land 5 of them on 1 of the game’s 20 paylines, then you’ll land a payout of 50 times your stake. Those figures are dwarfed by the potential riches on offer from the chequered flag which is the game’s wild. As well as replacing everything bar the bonus and scatter symbols, the wild pays 0.5, 5, 50 or 500 times your stake for a 2, 3, 4 or 5 symbol combination.

You’ll then head to the pit lane where you’ll be offered a selection of 5 different tyres. Choose one to reveal how many free spins you’ve been awarded. This can anything up to 20. A second selection of tyres then follows. Pick one of these to see what multiplier will be in play throughout your free spins. Get lucky here and you could get a 10x boost on each free spin. Once the feature has begun, you can re-trigger more free spins indefinitely if you land the Pit Stop Bonus symbol on reels 1 and 5.

Playtech has kept things pretty simple in Wheels N’ Reels. The design isn’t quite from the top drawer but its fresh enough to do the job. Likewise, the guitar-heavy soundtrack and the blaring engine noises.

The gameplay is a similarly stripped back. The Pit Stop Bonus feature has the potential to be a good one thanks to the large multipliers – there’s 100,000 times your stake to be won from every free spin if you fill the reels with wilds and get a 10x multiplier!

If your idea of an entertaining Sunday afternoon is watching Lewis Hamilton and company do their stuff, then Wheels N’ Reels should appeal. Even if you find F1 about as entertaining as watching paint dry, then the multipliers in the free spins make Wheels N’ Reels worth considering. If you like car themed slot games, Hotline by Net Entertainment and Buckle Up by Playtech should do the trick.