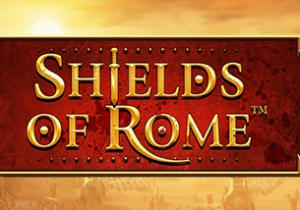 The sound and visuals in Shields of Rome are impressively done. In the background you’ll see the massed ranks of the Roman legions as they prepare to attack a city including weapons, fire and fluttering Roman banners. The purple reels feature A to 10 symbols plus goblets of wine, swords soaked in blood, helmets and chest plates. The top symbol is the Roman soldier which awards 6 times your stake if you land 5 on a payline. The Roman soldier spins in stacked formation which can further boost your winning chances.

You’ll notice that we haven’t so far mentioned any wilds. These don’t land on standard base game spins. Instead, they appear on every 10th spin. Each time a shield lands, that symbol position is marked in fire. On the 10th spin, all the marked positions are filled with wilds. A good haul here can quickly get things moving. This is called the Wild Fire Spin feature. The wild pays up to 8 times your stake for 5 in combination.

Land the Bonus symbol on reels 2, 3 and 4 on the same spin and you’ll trigger the Great War Free Games feature. You’ll have the pick of 4 different free spins and added wild combinations:

If you want to jump straight into the Great War Free Games feature, you’ll be given the chance to do so. Just click on the Buy feature tab. It will set you back 80 times your total stake to buy the bonus.

The ancient battlefield has proved fruitful territory for slots developer and Playtech has created another impressive game in Shields of Rome. The imagery is nicely done, backed by a score that gives the slot a real epic quality. The features stack up rather nicely too, offering enough variety and action to keep things interesting.

However, Shields of Rome is a low variance slot with top wins of 320 times your stake on every spin or free spin. We’re big fans of the Roman theme. If you are too, there are better slots out there with Playtech’s Gladiator Road to Rome (official movie slot) or Yggdrasil Gaming’s Champions of Rome my choices.