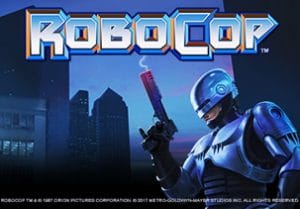 With the Detroit cityscape in the backdrop, the reels in Robocop have a futuristic look - joining the lower value playing cards are an assortment of guns, police cars and characters from the film. Robocop himself is the top payer land 3, 4 or 5 of these and you’ll win 3, 10 or 40 times your stake.

There’s also a wild that replaces everything apart from the police badge scatter. 3, 4 or 5 wilds in combination award 10, 20 or 100 times your total bet. The police badge scatter lands on reels 1, 3 and 5 only. When it hits on all 3 reels on the same spin, you’ll trigger the feature menu. Here you’ll be given the choice of 4 bonus features:

The 4 features above can all be triggered at random in the base game too. Instead of a full quota of free spins, you’ll instead be given a single spin with the added modifier extra in play. In the OCP Bonus feature, you’ll still get to pick and win but the 5x multiplier won’t be applied to your payout.

This version of Robocop looks terrific - the visuals are done HD style and are extremely detailed and super sharp. Sometimes good-looking slot games leave a little to be desired when it comes to gameplay. That’s not the case here as Playtech has packed in plenty of variety courtesy of the quartet of main bonus features.

Robocop is rightly considered a cult movie classic. Playtech’s slot game is a worthy adaptation and well worth a spin – as to is Top Gun and Ace Ventura Pet Detective.