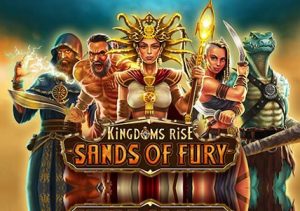 Set against a desert backdrop, the reels are set against a fortress. Joining the lower value gemstones are 5 more lucrative character symbols. The woman with the magnificent headdress is the best of them, paying 4, 6 or 7.5 times your stake if you land 3, 4 or 5 on a payline. Each of the 5 characters also has its own wild. All of these pay 12.5 times your stake if you hit a 5 in combination.

The set up here is a little unusual. Above the main reels is a set of Feature Reels. Each character has its own Feature Reel. Land a Character Wild in its Feature Reel and it will lock in position for 1 extra spin. Known as the Wild Fury feature, what happens next depends on what symbol lands in the character wild’s Feature Reel window. There are 4 possibilities:

On any spin, you could see gold token symbols appear. Each one that lands is collected in a meter. Once you have 500 or more tokens, you can head to the Kingdoms Rise shop and buy a feature:

You’ll also have a shot at landing one of 3 jackpot prizes in the Kingdoms Rise Jackpot feature. These can strike at random on any spin. The Epic Jackpot can hit on any spin. The Power Strike must hit by the amount shown. The Daily Strike Jackpot must be triggered by the time specified.

The gameplay in Kingdoms Rise: Sands of Fury is unusual. That’s certainly the case using tokens to buy features. They can deliver some top action. Add the classy design into the mix and it becomes a very playable game. We’re looking forward to the other slot games in what promises to be an epic Kingdoms Rise series. My favourite is Kingdoms Rise: Guardians of the Abyss.