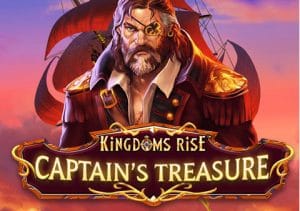 As you’d hope from a slot from such a well-known series, the design here is classily done. Set against a backdrop of cloud-filled skies, the reels are made up of jewel symbols which appear alongside a range of pirate-themed objects. You’ll see barrels, a ship’s anchor, a treasure map, a chest full of coins and a galleon. The pirate captain (a dead ringer for a bearded Kurt Russell) will get you an award of 0.6, 1, 2 or 5 times your stake if you land 3, 4, 5 or 6 in combination.

Wilds are central to most of the best action on offer in Kingdoms Rise: Captain’s Treasure. There’s a standard wild and a compass wild. Both of them substitute for all standard symbols and award 1, 2, 4.25 or 20 times your stake if you land a 3, 4, 5 or 6 on a payline combination.

Each time you land a compass wild, you’ll trigger the Captain’s Treasure Respins feature. The compass wild from the triggering spin is held and a respin follows. The needle on the compass will point up, down, left or right. A new wild is then added to that adjacent position for the respin.

The respins keep on coming until the compass wild returns to its original position. A payout calculation is made following every respin. Get a good trail of wilds here and you can land some serious results.

Like the other Kingdoms Rise slots, you can collect tokens in the base game which allow you to buy features from the Kingdoms Rise Shop. In this case, collecting 500, 1,000 or 1,500 tokens will let you buy the Golden Wild Respins feature complete with 1, 2 or 3 compass wilds.

Kingdoms Rise: Captain’s Treasure is part of the Kingdoms Rise jackpot network, so you’ll also have a shot at landing a bumper progressive prize. Triggered randomly, you can win a Daily Strike Jackpot which will be won by the time shown every day. The Power Strike Jackpot pays out before it reaches the amount shown. The Epic Jackpot is the one you’re hoping for as this has no limits.

Playtech has kept things simple in Kingdoms Rise: Captain’s Treasure. It’s not boring though as the respins with trails of wilds can deliver some top action. Filling the reels with wild symbols and you’ll win 1,000 x stake per respin. If you collect enough tokens for the Kingdoms Rise Shop, play the Golden Wild Respins feature with 3 compass wilds as this greatly improves your chances of filling the reels with wilds.

The design is as high spec as you’d hope. Mix those 2 elements together and you have another playable addition to the Kingdoms Rise series. In case you’re wondering, it uses the same mechanic as Playtech’s Anaconda Wild slot. However, you can buy an enhanced version of the feature as well as win 3 progressive jackpots.