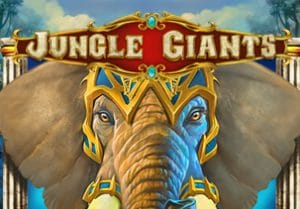 The design in Jungle Giants is superb - we’d go as far as to say as it’s as good as you’ll find anywhere. A rich jungle, flanked by stone elephants forms the backdrop to the reels which are made up of stone style playing cards and a range of wild animals.

They’re joined by a wild which can land on all reels and replace everything bar the Jungle Giants symbol. Land 2, 3, 4 or 5 wilds on a payline and you’ll get 10, 50, 200 or 1,000 times your stake. All of these symbols can land in a full 3x3 giant formation and fill the whole of the middle 3 reels.

The Jungle Giants logo symbol also spins in a giant 3x3 formation. When it fills the middle 3 reels, you’ll trigger the Free Games feature - here you’ll get 8 free spins with the lower value A to 10 symbols removed. The middle 3 reels are made up entirely of giant 3x3 symbols.

The 5 animal symbols and the wild all spin in stacked formation on reels 1 and 5 too. Land a full stack there in combination with the whole of a giant symbol on the middle 3 reels and some spectacular results are possible. You can re-trigger more free spins infinitely too.

Jungle Giants is very impressive all-rounder - visually, it’s superbly done. The gameplay is relatively simple but can pack a mighty punch, especially in the bonus round where the giant symbols can really come into their own. Land a full screen of matching symbols in the free spins and the big beasts in Jungle Giants can deliver some monster rewards if luck is with you. I recommend you also try Playtech’s Hologram Wilds which is superb.