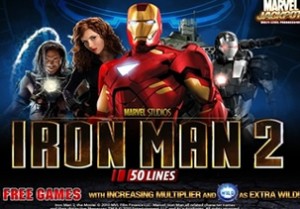 Playtech has given the original Iron Man slot an overhaul for the sequel. Instead of 25 paylines, Iron Man 2 delivers 50. Six of the symbols are also stacked. Many of the central characters from the hit film appear in the slot version including Downey Jr as Tony Stark / Iron Man and Scarlestt Johansson as Natasha Romanoff. As you'd expect, no expense has been spared on the look and sound of Iron Man 2. Many of the robots look a little similar though, especially given the stacked symbols and the visuals can feel a little cluttered.

The main attraction of Iron Man 2 is the Free Games feature which is triggered when 3 or more Iron Man 2 scatter symbols appear anywhere on the reels. You'll be awarded 10 free spins, all of which are subject to an increasing multiplier. This starts at 2x and goes up by 1 every second spin.

By the time you come to your final spin, you can look forward to your win being boosted by a 6x multiplier. The free spins also benefit from an extra wild that will sit in the middle position of the middle reel for the duration of the feature. The only real downside here is that the free spins cannot be retriggered.

This being a Marvel slot, you'll also have access to the Marvel Multi-Level Mystery Progressive Jackpot. Activated at random, you'll have a shot at winning one of 4 progressive jackpots if you manage to find 3 matching symbols on a 4x5 grid. The biggest jackpot regularly reaches six figures and beyond and can be a real life changer if it hits. The higher your bet, the bigger the chances of activating the feature.

The variance in Iron Man 2 is in the medium range, offering a decent balance of payouts. After a stellar original the big screen Iron Man sequel proved a bit of a disappointment to movie goers. The slot version is a solid performer though. It may not be an Oscar winner but if you're after some easy entertainment then Iron Man 2 certainly fits the bill. Saying that, I much prefer Iron Man 3 which is better as to are other Marvel slots like Thor The Mighty Avenger.