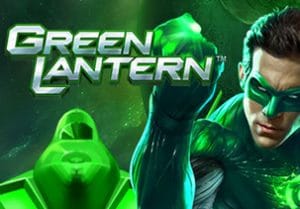 The back story for those unfamiliar with the comic book or movie is that test pilot Hal Jordan has been granted an alien ring which gives him special powers. He has to use them to defeat arch baddie Parallax and his plot to destroy the world.

The visuals are as top end as you'd expect from a Playtech powered movie tie-in - set against a green-tinged space backdrop, the reels include lower value A to 9 playing cards alongside a collection of characters from the film. They include Guardian of Oa, Sinestro, Kilowog and Tomar-Re. The Green Lantern himself is the most rewarding – a 5 symbol combinations pays 500 coins. There's also a wild that replaces everything and can land on reels 2, 3, 4 and 5.

The game is played using a 243 ways to win game engine - winning combinations are formed when the same symbol lands on adjacent reels. After every successful spin, the winning symbols are blasted away and replaced by the ones above. A new payout consideration is then made - these collapses continue until you land one that doesn't have a winner. This is known as the Collapsing feature.

Each collapsing reel win is collected in a Power Block meter in the bottom right hand corner of the reels. If you manage at least 4 collapsing reel wins in a row, you'll be awarded a charge which triggers 1 of 3 bonus features. Land more than 4 and you'll receive more charges and extra goodies when you play the feature. The details of the features are as follows:

Green Lantern also offers a shot at 4 DC Super Heroes Jackpots - this is triggered at random.  Pick matching symbols from the matrix and you're guaranteed to win 1 of the Mini, Minor, Major or Grand Jackpot prizes. The latter is the highest and offers you a minimum of £200,000.

The film version of Green Lantern didn't exactly wow critics or audiences - this slot game version is much more entertaining fare. The sound and visuals are good and there's plenty of action on offer in the base game and the features. The pick of the extras is the Secret Sector Mission feature - get on a roll here with the dynamic multiplier and some big winning opportunities are on offer. If superheroes are your thing, Playtech’s Man of Steel is recommended.