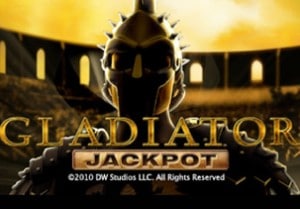 The Gladiator reels are filled with symbols featuring many of the main characters from the film. The one to watch out for is the Emperor, played by Joaquin Phoenix. Find 5 on a payline and a 5,000 coin jackpot awaits. Other characters to feature include Antonius Proximo (Oliver Reed), Senator Gracchus (Derek Jacobi), Lucilla (Connie Nielsen) and Juba (Djimon Hounsou). When any of the main characters appear in a winning payline you'll see a clip from the movie itself too. Unfortunately Russell Crowe doesn’t feature (might be something to do with image rights I can only guess).

Hitting 3 Coliseum Scatter symbols triggers the Coliseum Bonus feature. Once active, you'll be presented with a wall made up of 20 squares. Each row offers a different prize. Row 1 will determine the number of free spins with row 2 setting the level of multiplier. Which symbol will be the extra scatter is on row 3 with the extra wild picked on row 4. It's possible to win extra picks or even open up an entire column. The free spins then begin after all the picks have been made complete with the added extras.

The second feature is the Gladiator Jackpot Bonus feature which is activated when 3 Gladiator Mask wilds symbols appear on reels 2, 3 and 4. You'll then be transported to a screen featuring 9 bronze, silver or gold masks. Each helmet awards a prize which are totted up once all 9 have been revealed.

If you're lucky to find 9 golden helmets after triggering the Gladiator Bonus from the base game, then look forward to an enormous pile of coins as you'll have just hit the progressive jackpot. The jackpot often reaches 7 figures so the payouts can be real life changers. The biggest win was over £2 million from a UK player with the latest win being over £1.3 million in May 2015.

Available to play on mobile and tablet as well as desktop, Gladiator Jackpot does justice to the source material. It may be an oldie (the original non-jackpot version was released in 2008) but it remains a goodie. The graphics may not be quite as sharp as more recently released equivalents, but there's still plenty to enjoy.

And with the jackpot feature you'll have a chance at winning an arena full of coins. Like the crowds in the Coliseum, Gladiator Jackpot gets a thumbs up from this jury. If you love progressive jackpot slots, Mega Fortune by Net Entertainment is THE jackpot slot to play as it’s produced the largest online progressive jackpot in history – a colossal €17.8 million!