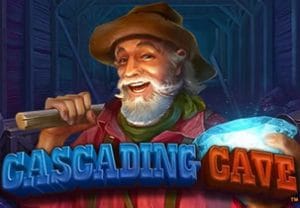 The design in Cascading Cave is very nicely done. The setting is a diamond mine. On the reels you’ll see blue, green and red gemstones as well as a pickaxe, a lamp and a donkey. The top symbol is the bearded miner. Land 3, 4 or 5 of him on a payline and you’ll receive a payout of 2.5, 10 or 100 times your stake. The white diamond is the wild. This can land on all 5 reels and substitute for all of the standard symbols. Landing 3, 4 or 5 wilds in combination delivers 2.5, 10 or 100 times your stake.

The action in Cascading Cave takes place using the Collapsing Reels feature. After a winner hits, those successful symbols are removed and new ones drop in and replace them. The collapses keep on coming as long as a new winning combination is created.

Cascading Cave comes with a Diamond Drop feature - this is triggered by landing 2 or 3 of the TNT symbol on the same spin. Once triggered, you’ll see a number above 1 of the active reels. This shows how many multiplier wilds can land on that reel.

A totally new collapse takes place. If a winner appears on the triggered reel, a new collapse follows with up to 3 new multiplier wilds replacing the old ones. The collapses continue until there’s one where no new winner hits. The multiplier wilds can boost payouts by 2x, 3x or 5x during the Diamond Drop feature.

The collapsing reels means the base game ticks over at a decent pace. You can expect to land the Diamond Drop feature regularly too. We found the feature to be a bit of a mixed bag as far as payouts opportunities go. A good run of collapses with multipliers to match can soon get the coins flowing though – there’s up to 10,000 times your stake to be won with the 5x multiplier.

This mining-themed slot game looks and sounds superb. The gameplay, though rather limited, isn’t bad either. We liked Cascading Cave but not one to choose if you’re after a huge range of extras. If you want to go digging, Dwarf Mine from Yggdrasil Gaming would be my choice.