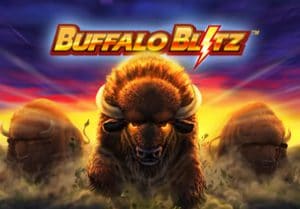 The set up in Buffalo Blitz is certainly a little different from the norm - the game engine features 6 reels and a whopping 4,096 ways to win. Successful combinations are formed when the same symbol lands on adjacent reels rather than in traditional paylines.

Joining the lower value playing cards are bears and elks which offer payouts of between 10 and 200 times your line bet for between 2 and 6 symbol combos. Next up are the raccoon and big cat which award up to 250x. The top payer is the mighty buffalo which appears stacked on all reels and offers up to 300 times your line bet payouts.

There's also a wild that appears on reels 2 through 6 and substitutes for everything bar the free spins symbol. It's useful of course in the base game but really comes into its own during the feature.

To trigger the Free Games feature, you'll need to land at least 3 of the free spins symbol anywhere on the reels - 3 offers 8 free spins, 4 will get you 15 free spins with 5 offering 25 free spins. Land a full 6 free spin symbols for 100 free spins!

More importantly, when the wild diamond forms part of a winning combination during the feature, it will award a random multiplier that can boost your payout by 2x, 3x or even 5x.

Despite the 6 reels, the free spins feature wasn't the easiest to trigger. It did pay out decent amounts when we did land it though and re-triggering extra free spins was much easier than the initial trigger. We found the variance to be in the high.

There's plenty of action on offer in Buffalo Blitz courtesy of the 4,096 ways to win game engine. If you like the wilderness theme, then this animal adventure can serve up some wild action. One thing to mention – it’s virtually identical to Raging Rhino by WMS which can only be a good thing.