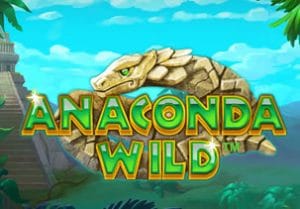 The design in Anaconda wild is very nicely done. The action takes place against a backdrop filled with lush green foliage and a jungle pyramid. On the reels you’ll see lower value playing card symbols alongside gem-encrusted bracelets, jade daggers, an icon, a goblet and a treasure chest. The mysterious woman is the best of the standard symbols awarding 20 times your stake if you land 5 or 6 in combination.

As you’d expect given its name, all the best action in Anaconda Wild comes with the wild. It substitutes for all other symbols and also offer some pretty hefty payouts in its own right. Land 3, 4 or 5/6 wilds in combination and you can look forward to a payout of 4, 8 or 40 times your stake.

The wild also triggers the game’s only extra, the Stone Serpent Feature. When a wild lands, it moves around the reels with each spin that follows, leaving a trail of wilds as it does so. The wild keeps on moving until it returns to the position on the reels where it originally landed.

That’s your lot as far as features go. There aren’t any free spins, pick me rounds or other extras here. All the action centres on the wild. A good job then that deliver plenty of action, especially if you manage to land more than 1 wild on the same spin.

If you like slot games with plenty of variety then Anaconda Wild probably won’t appeal. The gameplay here is very simple and repetitive. Basic it might be but this isn’t a boring game thanks to the trails of wild extras that can deliver plenty of action.

There’s nothing too flashy on offer in Anaconda Wild. The Stone Serpent Feature makes this straightforward game a very playable one though. If you like wild trails, I highly recommend Wild Toro (by ELK Studios) which has plenty going on and won numerous industry awarded.